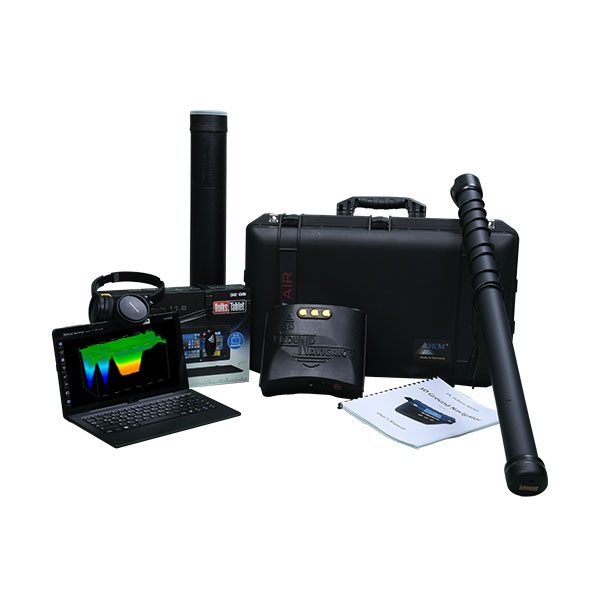 Ground Navigator is the most modern three-dimensional ground scanner and the sophisticated metal detector which is developed by OKM the great German company which is featured in the field of monuments detection and buried treasures. It is characterized by high accuracy in detecting underground spaces, enabling you to easily locate archaeological sites.

The device allows you to chapter three-dimensional images of the targets underground, and the device has a high sensitivity to the frequencies of metal buried underground, which makes it distinguish the different types of metal accurately and tells you if it is gold or silver or otherwise.

The treasures detector Ground Navigator is accredited by the world’s largest exploration delegation and it is a holder of many of the international quality certificates, specializing in the exploration of the golden treasures, archaeological tombs, and precious metals

The German gold detector Ground Navigator is characterized by an underground research depth up to 40 meters, which is the maximum depth possible to reach the real results with the device is confirmed by OKM factory guarantee .

The unique features and technical specifications of the 3D GROUND NAVIGATOR gold detector are:

Package Contents– Control UnitThe control unit is the main processing unit of the device. It contains with a modern small digital screen and simple control buttons to select operating modes and determining other parameters for scanning.– Charger, docking station and travel adapter To recharge the Power Packs use docking station and charger a travel adapter completes the charging accessories to make sure the Power Packs is easy to charge via any power source worldwide.– Wireless Headphones The user can use standard wired headphones or wireless Bluetooth headphones or simply by using the internal speaker in control unit, but for comfort of the user wireless Bluetooth headphones so it is more convenient .available in the package.– Cable to transfer data Used to transfer data from the main control unit to the Tablet Pc or any other computer with installed Visualizer 3D– 3D Software (Visualizer 3D) on DVD Visualizer 3D analysis software display the scanning data as 3D graphics so it make easy to determine depth and size of detected objects.– Windows 10 Tablet PCFor easy field operation the visualizer 3d software  load into mobile windows Tablet PC. So by using a tablet the operator can analyse scanned images quickly with visualizer 3d in the search field.

so it is easy to select the desired mode simply by using suitable mode from menu in main control unit.

The device include following operating modes:

This is most powerful mode and used to perform a real detailed 3D scanning for specific area that can be defined by the user; the scanning process is performed by using Telescopic Super Sensor which record the scan data for every point in this area, then it  transfer directly to bundled Tablet PC via USB cable,

the scanning data show directly on screen of tablet by 3D analysis software which give the prospector detailed information about targets such as  its type, shape, size, depth and position.

By using this mode it easy to find every type of metals and golden treasures, artifacts, tunnels, ancient antiquities and everything underground.

This operating mode is used to detect ferromagnetic metals underground such as nails, nuts and objects like soda cans and iron trash. the scanning is done also using the Telescopic Super Sensor ,

this mode is only an acoustical mode, which does not create any graphical representation.This mode is useful for performing quick pre-scan for specific area for removing trash from the surface and eliminates garbage or useful objects.

This operating mode is useful for discrimination between different metal typesof buried objects underground like ferromagnetic metals, precious metals or voids.The scanning is performed by the probe and when it move above any buried object beneath itwill display a graphical signature on tablet screen (via Visualizer 3D software).

signal of non-ferrous metal such as gold,silver

ferrous metal such as iron

signal of non-metallic object such as space or tunnel

The super sensor used in all operating modes to perform the scanning process, with you can find anything from small metallic targets such as gold nuggets, coins, rings, jewelry and other valuable metallic objects hidden under the ground can be found easily.

Also it is very suitable to detect larger objects like boxes, pipes, gold or silver aand other metallic masses which are buried deep under the surface

In new design the super sensor equipped with a light sphere called “LED Orbit”,that can indicate the measured values by color changes during the scanning process for example if LEDs color is red then it is a metal .

Visualizer 3D software offer  in-depth analysis for the data collected by super sensor during the scan process , the scanned data presented as 3D graphs,  from it the operator can know a detailed visual information about buried targets such as its shapes, sizes, locations and depth.

There are no reviews yet.

Be the first to review “Ground Navigator 3D” Cancel reply